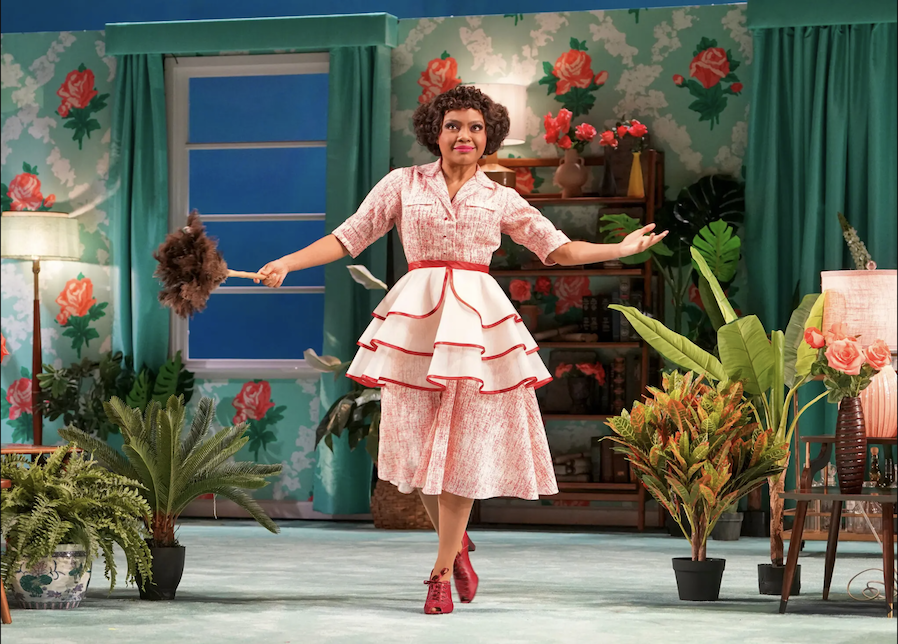 Gabby Beans, who is the granddaughter of Bobbie and Hillyard Beans and daughter of Michael Beans, all Perry County natives, is appearing in “The Skin of Our Teeth” on Broadway. Since this interview, Beans was nominated for a Tony award for her breakout performance. The Daily Beast interviewed her here.

The show opened April 26. Before Beans entered theatre, she was stuying neuroscience. The Perry County Herald caught up with Beans recently, and she discussed her life, how she came to the theater, and her connections to Perry County and the Black Belt.

Her answers to the Herald’s interview questions are reprinted in full below:

“I was born in Americus, Georgia. My father, Michael K. Beans, who is a retired Lieutenant Colonel in the Army, was stationed in Columbus, GA at the time. We moved around quite a bit during my childhood years, but our family spent larger stints first in Northern Virginia, then in South Germany where I attended High School.

“I’ve always been a performer. From early childhood I would put on plays and shows for my parents. My mother enrolled me in dance classes from an early age, and I really enjoyed preparing for and performing in recitals. Around 6th grade is when I began to experiment with the idea that I’d like to become a professional actor, but my parents and teachers encouraged me to invest my energies in more stable pursuits. Outwardly, I put my dreams of acting on the shelf, but I had a strong inner knowing that at some point I would take it up more seriously.

“Throughout high school and college I acted in student plays and took theater classes, but I was still afraid to pursue my passions wholeheartedly. I attended Columbia University as an undergrad, and double majored in Neuroscience and Theater, but the plan was always to apply to medical school. The turning point came in my senior year. At Columbia there is a rigorous internal review process that prospective medical school applicants must complete before they are permitted to apply to their schools of choice. I remember attending the meeting where the pre-medical counselors explained this process. There was this pink sheet of paper with a lengthy checklist of all the things we were expected to do over the course of that semester. As I looked at that pink piece of paper, I experienced a moment of supreme clarity. I knew I had a choice: I could either white-knuckle my way through attempting to become a doctor, or I could try my hand at what truly lit up my soul. It was there that I decided to apply to graduate school for acting instead of medicine. After completing my undergraduate degree, I attended the London Academy of Music and Dramatic Arts in London where I received my MA in acting.

“My connection to Perry Country/Marion is through my grandparents Bobbie Beans, and Hillyard Beans, and my father, Michael Beans. My grandfather died when I was pretty young, but I always admired the greenhouse he kept in the backyard of their house, and his quiet knowledgeable way of moving through the world.  During my elementary school years we would frequently visit my grandmother, and I enjoyed these visits immensely. Bobbie was such a loving and wise presence in my life, and I’m very grateful to have spent time with her in Marion.

“Right now is a really special time for me, professionally. Yesterday, I had my Broadway debut in the revival of “The Skin of Our Teeth” at Lincoln Center Theater (you can find out more about the show HERE). One of the reasons I wanted to become an actor was because my mother took us to see Broadway Shows as kids, so to be part of that legacy is a dream come true. I absolutely adore this show, and the cast and crew are absolutely phenomenal.

“I think Amiri Baraka said it best when he said, “The artist’s role is to raise the consciousness of the people. To make them understand life, the world and themselves more completely.” That’s my goal with my work. I hope that by living with integrity, and creating from a place of unconditional love, I can be a conduit for positive, transformative awareness.”