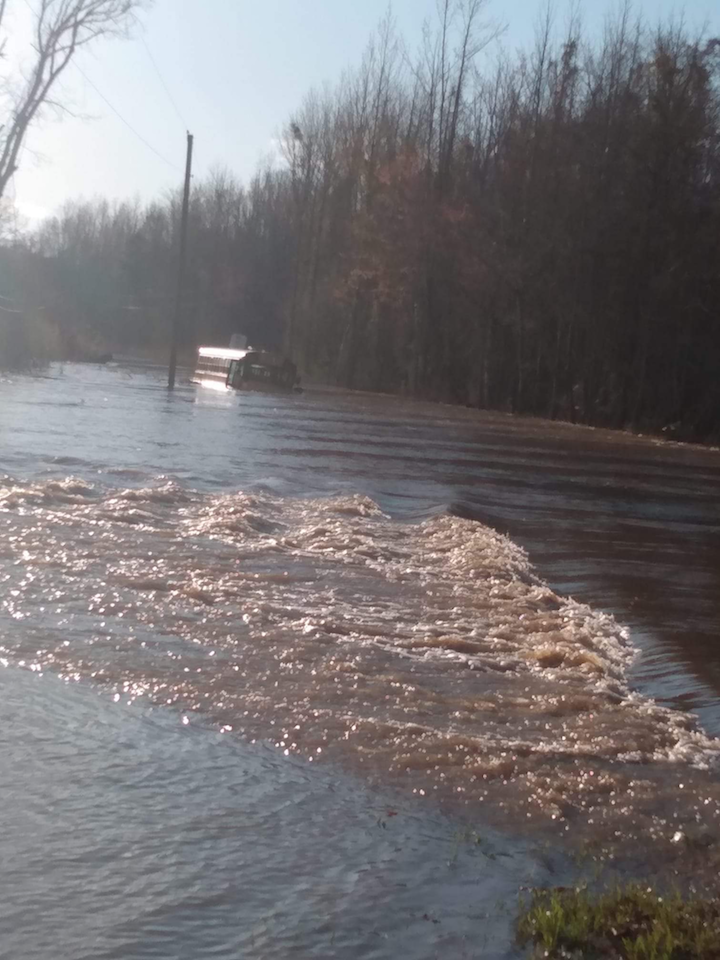 Ed. Note: All photos and video by Betty Ann Abernathy Sanders, who is quoted in the following story.

Though last Tuesday night’s weather included a tornado warning for Perry County, it was flooding that caused the most problems in a night that saw severe weather batter the region. That pattern was expected to continue as of press time this week, with another strong storm system moving into West Alabama on Wednesday.

One resident of East Perry County says her road floods at least once a year during the rainy season. People in the area know to watch out when Ocmulgee Creek escapes its banks, and usually the rising water is more of an inconvenience than a hazard. Last year, though, someone lost a car to the flooding. And a week ago, the rising water cost Perry County a school bus.

It happened near Alabama Highway 219 on Poplar Grove Church Road, which some people in Perry County also call O.C. Dobynes Road. The “official” O.C. Dobynes Road joins Poplar Grove Church Road nearby. The road crosses Ocmulgee Creek not far from the highway, and Betty Ann Sanders says it’s flooded at least once a year in the six years she’s lived there. She and her husband David live on land that was in the Middlebrooks family. She said David and his uncle, Gene Middlebrooks, deeded a right of way to Perry County before the new bridge was constructed there around 2005.

“The road was not built up to match the bridge, so the creek comes across it when we have heavy rains,” she said. She estimated 10-12 people were trapped at home until the flood waters receded late last week. Farther out, the road leads to National Forest land.

“We rushed to town to ‘buy our milk and bread,’” when heavy rain is in the forecast, she said with a laugh, invoking the time-honored Southern tradition of provisioning for a storm. But being trapped at home for days, potentially, is serious: “We make sure to keep medicines and surplus of first aid supplies, batteries, groceries…and pray we don’t have a medical emergency, fire,” she said.

She said the flooding is mostly a concern during tornado and hurricane seasons, but she and her family stay prepared year-round.

Sometimes that can mean changing plans, if the weather gets active while you’re away from home. “Once, when I returned from Greensboro, I couldn’t get through [the flooded road] in my Mazda,” she said. “I was about to return to Greensboro, when my husband suggested I go up 64 and wait at his uncle’s place.  He was able to cross ever so slowly in his pickup and picked me up.  So now, if I’m away from home and we’ve had a heavy rain, I call to get a report before I make the trip.”

So, about that bus…

That brings the story around to the school bus. Sanders shared photos and videos of a Perry County school bus last week trapped in the flood waters. She said a boat had to rescue the driver Wednesday afternoon, but that there were no schoolchildren left on board. By Friday afternoon, the water had receded enough for trucks to get to the bus and pull it out.

Perry County Engineer Deandre Kimbrough said the bus driver had been trying to get home before the water made the road impassable, and misjudged his chances.

“There were no kids on there, he was just trying to get home,” Kimbrough said.

Kimbrough said the creek has a tendency to flood in several places if rain is heavy enough. And conditions last week were ripe for it.

“We got a ton of rain,” he said. “And we were already kind of saturated from the previous [storm] event” the week prior, he said.

Some initial estimates released by the National Weather service showed Perry County as having received as much as five inches of rainfall in places, some of the heaviest saturation in the state from last week’s storm.

Kimbrough said Perry County Sheriff’s Department was involved in the rescue of the bus driver on Wednesday.

Perry County Commissioner Brett Harrison, whose District 3 includes the area, said on Friday that flooding had been a problem there since before his time on the commission. And with seemingly relentless rain, he said, it’s happened frequently in the past year.

“Since last April, there haven’t been seven days in a row that it was dry,” he said. Harrison said the effects from a severe weather event like the one last week can quickly overwhelm the county’s small highway department. He rattled off a number of other roads in his district that had seen flooding that week: “Foster Road, Marietta Church Road…It really has handicapped the county.”

Perry County Highway Department’s crew usually works 10 hours a day, Monday through Thursday, and are off Friday through Sunday. The need to respond to damage in the wake of the storm had them working on Friday last week, though, said Harrison. “We’ve addressed several major issues in the past four or five days,” he said last Friday.

Harrison said he felt part of the problem with flooding and erosion on the county’s dirt roads—Poplar Grove Church Road is paved—was a lack of access to good base material. Perry County sources the majority of its dirt and gravel for road work from pits in the county. These are generally leased from private landowners and excavated for material by county workers.

“We used to have good sand-gravel base material to put down,” he said. “But that pit just went away.” The county’s main pit for that area now, he said, provided good fill material but not as much sand and gravel as was needed to create a solid base for its many dirt roads, which. Of which,  he has more in his district—325 miles of dirt roads, he said—than in any other county commission district in Alabama.

Sanders said she hoped that more attention on the problem in the wake of  this most recent incident might spur some sort of resolution to the problem. Still, in spite of the unpredictability the weather can sometimes bring, she said she wouldn’t choose to live anywhere else: “Being surrounded by God’s gift of nature, a happy husband in his element, the good neighbors, the privacy and space…not everyone has the opportunity to experience and appreciate such.”