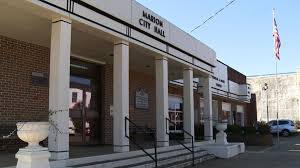 Marion’s City Council got an earful from residents at their Monday night meeting about a range of concerns. Before the meeting officially goes into session, the mayor and council reserve a time for public comment, where members of the public can voice their concerns directly to the council and public without having to be a part of the meeting’s agenda. This week, three Marion residents spoke about problems in their neighborhoods.

Tracy Reynolds, who lives in the West Lafayette Street area, spoke first. She said she was concerned about the city’s noise ordinance, calling it “completely unenforceable.”

“When you say ‘unenforceable,’ explain that,” said Mayor Dexter Hinton.

“So you’re having some noise issues,” Hinton said.

“That’s a—it’s a night spot,” said Police Chief Tony Bufford. “If the music is a little excessive, we’ll go in and tell the business owner to turn it down…we do the best we can to respond to the noise.”

Bufford said a lot of the problem wasn’t with the business itself, but from cars in the parking lot.

“We do what we can to make them leave,” he said. “As far as enforcement, we’re currently taking it to another level as far as writing citations, putting them in municipal court, seeing how that works out.” He said police had spoken with the club owner, who indicated he was willing to work with police on the matter.

Kris Turner, who lives on Green Street, said she had recently reported noise issues coming from the same area, calling 911 on the previous Wednesday night.

“[The operator] asked me to be quiet for a minute, and she could hear it over the phone,” Turner said. That call resulted in a visit from police, she said, but didn’t solve the problem. “As soon as the police car is around the corner, it’s back up again. I’ve been there since 2011 and it’s only gotten worse.”

Reynolds said she recognized that the area in question was a business district, “but we are in a residential district,” she said. “The noise ordinance should apply to those cars.” She said there was a problem in the area every night. She said there used to be “No Loitering” signs in the area, but there weren’t any longer.

Reynolds said she had seen people drinking in public in the area, which is against state law.

Councilmember Joe Pearson said there was also a “major” traffic problem in the area.

“I’ve been down there in the afternoon before the club is open, and you would have to sit there and wait because cars would stop to talk to people who are loitering,” he said.

“Besides signs and more patrols, what else can we do?” said Hinton.

“We could take the ordinance to the city attorney,” said Councilmember Jeff Nail, himself an attorney. “If we can’t enforce it because it’s vague.”

“We could ask them to pad the walls [with sound canceling-material],” said City Clerk Laura Hinton. “Some larger cities do that.”

Turner said another problem was vehicles speeding through residential areas.

Mayor Hinton said the city would look into solutions.

Lucinda Shelton said she had a complaint about the speed bumps that were installed on Centreville Street last week. She lives in that neighborhood, and said that the unexpected bumps nearly caused her to total her car—“And I just bought my car.”

Hinton said the “Bump” signs had been up in the area where the speed bumps were eventually installed for about a year.

“The signs have,” Shelton said, but not the speed bumps. “And if a sign has been there for a year…so what? I wasn’t expecting a speed bump to pop up. Who’s going to think about it?” after a year.

Hinton said the speed bump was in response to a petition from residents in the area.

“I’ve talked to everyone on Centreville Street, even the schools. They say it’s tearing up their buses,” she said.

Hinton said the city would look into lowering the height of the speed bumps or replacing them with something more akin to a “speed table,” a less-aggressive piece of speed-breaking infrastructure.