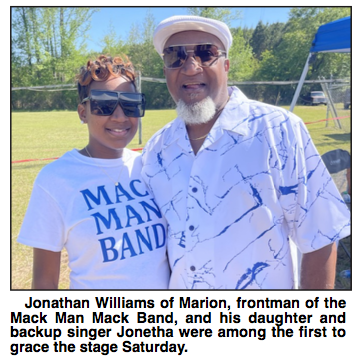 “We know it’s hot, but we came to party,” said emcee Portia Shepherd on Saturday as the first band was setting up. It was the middle of the day, and while some folks had been tailgating all day, things were just getting started.

“We ain’t been outside in two years!” Shepherd quipped, and the excitement about the event after two years of COVID-imposed isolation was apparent.

Shepherd said that, all told, 4000 people had come to Perry County to take in the Black Belt Reunion Blues Show and Tailgate in Marion. The event lasted all day Saturday at the Ralph Eagle Memorial Arena on Highway 14 east of town.

On the mic as the festival was heating up, Shepherd name-checked the many towns and cities in the Black Belt, and beyond, represented in the crowd: Marion, of course, but also Selma, Newbern, Uniontown, Greensboro, Huntsville, Birmingham, Tuscaloosa, as well as folks from other states.

Jonathan Williams, leader of the Mack Man Mack Band, is a Marion native. His band was the first to play on the festival’s stage Saturday. The band has two CDs out with a third one on the way.

Williams’ daughter, Jonetha, works as a background singer and all-around right hand when her father’s band plays. She said she and her father were proud to be residents of Perry County. The last gig the band played locally was about four months ago, in Sprott.

Williams said he and his band travel “all over” to play gigs, but he was especially happy to be playing for his hometown that day.

Shepherd reminded the crowd that proceeds from the event that day would go toward a good cause.

“You guys are partying with a purpose,” she said. “The proceeds from tonight are going to put a new basketball court in Marion.”

Shepherd said the event’s organizer, Brian Moore, who also works as the supervisor of the Marion Water and Sewer Department, had put on the event specifically to give back to his hometown.

On the heels of Saturday’s success, Shepherd said, there were more events in the works throughout the Black Belt, intended to spread the love, and the community support, around.