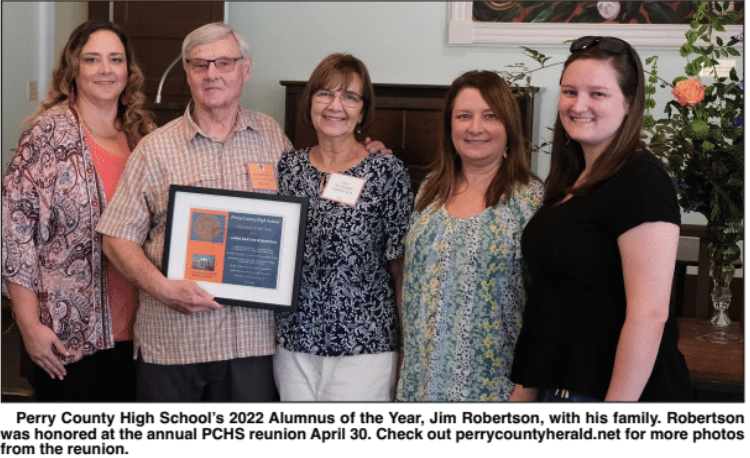 Recently elected President of the Perry County High School Alumni Association, Diane Harrison, welcomed classmates and friends to the 28th annual meeting and fish fry on April 30th. Attendance of over 290 at the event had broken a record and for the first time lunch was provided by a food truck. A fried catfish lunch and sides were served by South fresh.

The group presented its highest award, “Alumnus of the Year”, to Jim Robertson of Helena, Alabama. The award stated: “In Grateful Recognition of your dedicated Service as a Member of Perry County Alumni Association. An Eagle Scout who lives his life by the Scout Oath & Law. Educated at Perry County High School, Marion Military Institute and Auburn University. 36-year career in Advanced Telecommunications. Willing Service to his Country and Community. Devoted to his Family and his Faith. Class of 1961.”

Jim is a member of PCHS Alumni Board of Directors. He handles the group’s mailing list, is administrator of their facebook and editor of the newsletter which he initiated to improve communication with the members.

Sherry L. Barton of Marion was recognized for her service as President of the PCHS Alumni Association for 21 years. She was one of the founding Directors when the organization was “chartered” in 2001 and soon after was elected its first President. Sherry faithfully led the group and in partnership with the Perry County Historical Commission, has helped preserve and maintain the 1850 Marion Female Seminary/Perry County High School building.

Carl Cooper was a coach and teacher at PCHS from 1946-1954. He had served in the Marines and Marine Reserves for 38 years and had fought in WWII, Korea, and Vietnam. He died in 2021 at the age of 101. Col. Cooper loved Marion and PCHS and continued to attend the annual meetings and various class reunions.

Coach Cooper’s military portrait of the well known photographer Jeffrey Rease (www.portraitsofhonor.us) was displayed in the meeting room. Items donated by the Cooper family were exhibited in one of the upstairs museum areas. They included his sweater, football and basketball plays, photographs, news clippings and numerous other articles.

Working with the Cooper family representative, Danny Cooper, to accept and stage the artifacts was a committee chaired by Jim Robertson. Other committee members were two of Coach’s players, Roy Barnett and Jim Brady and association Vice President John Anderson.