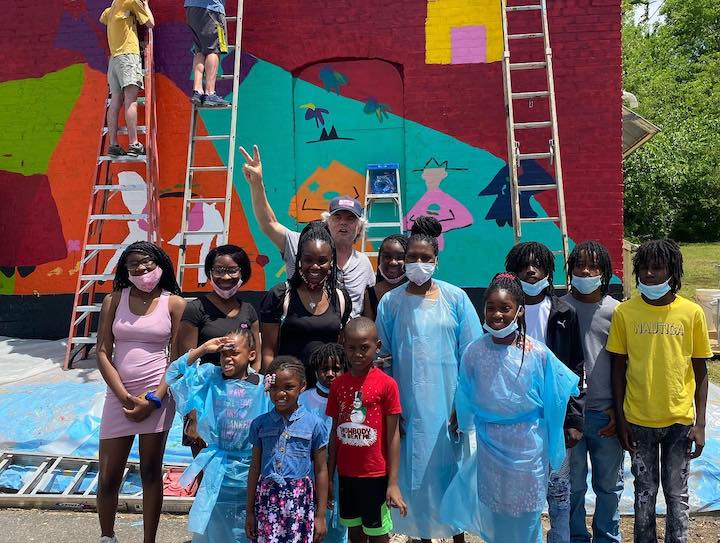 Mural artist Tres Taylor brought his ‘Revolution of Joy’ mural project to Uniontown, in his ninth installation of a twenty mural project. Kicking off the morning of Saturday, April 23, and running through Sunday, April 24, the mural was a community-fueled venture that was titled “In the Footsteps of Children.”

The project was sponsored by Can’d Aid, with participation from community organizations like: Community Foundation of Uniontown, C.H.O.I.C.E., and the First Baptist MB Church youth group.

Uniontown residents of all ages came to lend a hand, some children even lending their feet for some of the finishing touches on the painting. Uniontown resident Floyd Sanders offered his skills as a sign painter to add “Welcome to Uniontown” to the mural’s centerpiece—a well, representing the fabled Fountain of Youth. Sanders was also responsible for bringing Taylor to Uniontown, assisted in scouting a suitable spot for the mural, and was acknowledged for his instrumental role in the project in a social media post from the Community Foundation of Uniontown.

Children who showed up to paint were treated to a story of the mural’s meaning, which was centered on appreciating the earth and caring for the planet. Children were also given bird calls to offer music for the birds and the volunteers, alike.