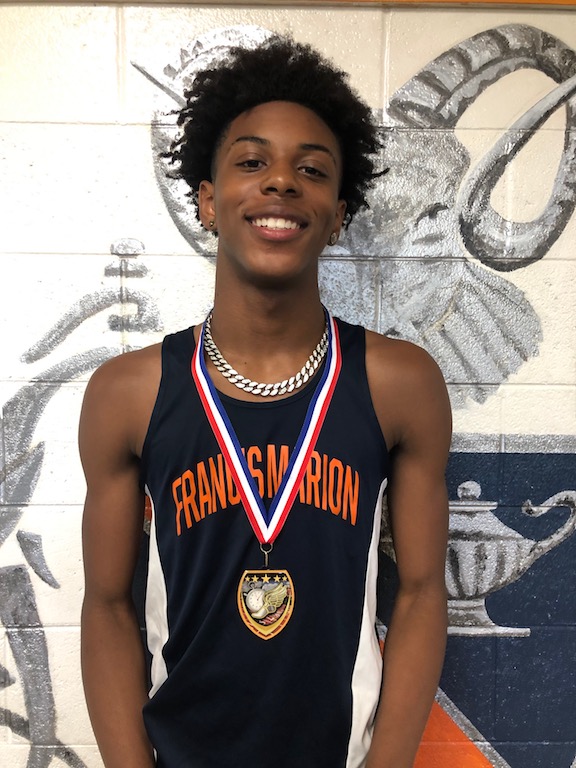 On April 21, the Francis Marion Running Rams competed at Northridge High School in the West Alabama & Tuscaloosa City/County High School Championships. Deldrick Shelton, who previously won the Huffman High Smart Taxx Invitational in the high jump category, with 5’6”, faced a much high level of competition than he had at Huffman.

Both Shelton and Javion Davis walked straight off the track from running personal records in the 400m dash and went straight into the high jump event. Davis and Shelton both cleared 5’8”, along with about six other jumpers, but only Shelton cleared 5’10” on his first attempt. The other two athletes only cleared that bar on their second and third attempts. Davis, unfortunately, clipped the bar with his foot on all three attempts at the 5’10” jump.

Neither Shelton nor the other two athletes could clear 6’, giving Shelton the win for clearing 5’10” the fastest. The jump makes a 4-inch personal record for Shelton in his first year competing in the high jump.

Shelton was the only Running Ram to make it on to a platform at Northridge, but that doesn’t mean the rest of the team didn’t perform well, with many setting personal records. There were 14 schools competing ranging from 1A to 7A schools, which makes it the highest level of competition the Rams have faced all season. Here are some more highlights from the Francis Marion athletes who didn’t quite find their way on to the podium:

• Le’Naya Essex placed 5th out of 46 athletes in the

• Lionel Hinton placed 4th out of 60 athletes in the discus.

• Lionel Hinton placed 5th out of 63 athletes in the shot put.