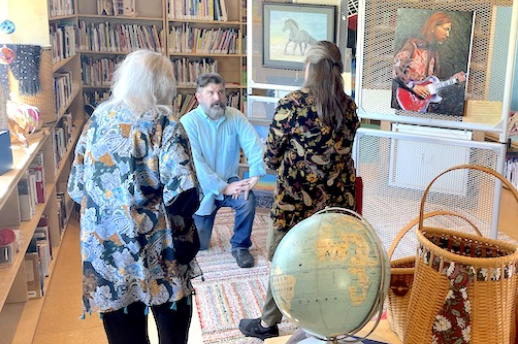 Artist and Black Belt native Jason Irvin has been busy. Followers of his social media accounts will see that the painter and sketch artist has been producing art relentlessly in recent months, and he’s wasted no time in putting that art out into the world.

This past weekend, Irvin traveled to Oxford, Mississippi along with scores of other artists, craftspeople, musicians, other vendors, and attendees from all over the southeast and the country for the Double Decker Arts and Music Festival. He said he hoped the event would be an opportunity to connect with other artists and lovers of art from throughout the region, and to bring his vision of the world, his home, and the people and things that inspire him, to a wider audience.

Irvin is the son of Peggy and Wayne Irvin of Uniontown. His father was an early Black Belt catfish farmer, and his mother was the well-known office manager at Southern Academy for many years. Though Irvin has a Uniontown address, he lives only a short distance from the Hale County line, graduated from Southern, and has many friends and connections throughout Greensboro and Hale County.

That hometown support was evident April 2 at an event at the Newbern Library. There, Irvin, joined by his family, held a painting demonstration, displayed some of his original works and prints, and talked to friends and attendees about where his art comes from and what inspires him.

Jean Woods Watson of Newbern taught Irvin science at Southern Academy. Watson was in attendance at Irvin’s Newbern showing. She said his artistic ability was evident even at an early age and that she was proud to see how accomplished he’s become—even if her class might not have been his favorite subject.

“He started off doodling in science class!” Watson laughed. “That’s how he got his start in art.”

Irvin did not deny that his early forays into art may have come, at times, from stolen moments in school. But it was later, in art classes taught by Bethany Windham Engle at Shelton State Community College, where he says he truly grew into an artist. Irvin graduated with a degree in studio art.

“[Engle] was an awesome, awesome teacher. And she’s very accomplished, too. She’s shown [art] all over the country,” Irvin says of his professor and mentor. Engle lives in Greensboro with her daughter, Eve.

When asked about her former student, Engle said Irvin had visited her at her Greensboro home recently. She said she enjoyed catching up with him, and was proud to see him pursuing his art.

The thought that goes into Irvin’s paintings is obvious: his paintings are well-composed and arresting, and that is no accident. As a graphic designer by trade, Irvin works at Drake Printers in Tuscaloosa for his day job. One of the design techniques he said he often uses in his painting is the Golden Ratio. A graphic representation of the mathematical Fibonacci sequence, the Golden Ratio has been studied by philosophers, mathematicians, and artists since the classical era. The perfect fractal it creates when expressed visually gives Irvin a useful formula for composing his paintings.

“In my paintings, everything fits into that Golden Rectangle,” he said.

Some of the first paintings attendees at Newbern saw were vibrant, photorealistic painted portraits of blues music icons like Duane Allman, Muddy Waters, and B.B. King.

In addition to his work as a visual artist, Irvin is an accomplished musician himself. His band, the well-known bar rock outfit Fuzzy Navel, was active throughout the region in the 90s and early 00s. During their heyday, it was not uncommon to spot a Fuzzy Navel t-shirt, featuring an iconic sunglasses-sporting peach, on the campus of one of the south’s colleges or in cities like Tuscaloosa, Birmingham, or Auburn.

“We had a lot of fun,” Irvin said of his time with Fuzzy Navel. “Those were some great guys.”

Irvin said his time spent playing music was important to him and his creative life.

In his output as a painter, he said, he draws inspiration from those musicians whose work has continued to speak to him.

“Music has always a huge part of me and my story, and I think that painting some of my heroes is something that I’ll definitely continue to do,” he said.

Another source of inspiration that is evident in Irvin’s creative output is the Black Belt itself: scenes from local farms and small towns characterize another side of his work. A recent painting he produced of the venerable and beloved Newbern Mercantile Co. has been a popular sight for Hale County people.

Theresa Crawford of Marion was also in attendance at the Newbern event. She suggested more local subjects for Irvin—including the Marion Female Seminary: “I think that would make a great subject,” she said.

It was an example of how eager people in the Black Belt are to see their communities represented artistically. Irvin said he wanted to pursue more of that.

“There’s lots of really cool towns around Alabama that I just want to go and spend the weekend painting,” he said. “People seem to really like local art, and that fits into my thing.”

At the same time, he said he doesn’t want to rush art to market, or to only put out work because he thinks it will sell.